This article appeared in the Stornoway Gazette, 1 August 2013

Brue Highlanders make a moo-ve to the Swiss Alps 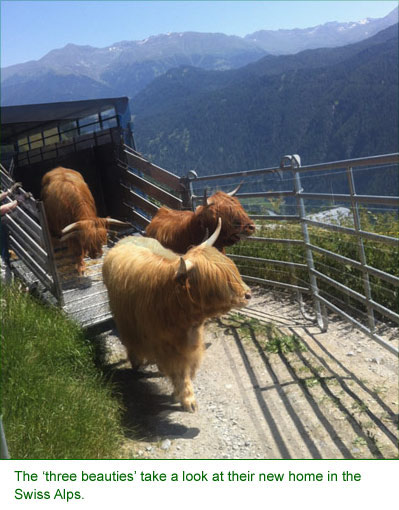 Three Lewis ladies are feeling on top of the world this month as they make a new life for themselves high up in the Swiss Alps!

Ella a’ Ghlinne of Brue, Brighde of Tom Buidhe and Ciorstaidh of Tom Buidhe are pedigree Highland heifers sold by Brue Highlanders to a Swiss farmer whose pastures lie more than 1,530 metres above sea level.

The sale is a first export for the Brue Highlanders fold owned by Kenny and Lesley Matheson and is the first import for the Swiss farmers Jon and Erika Janett who have a large stock of Scottish Highland cattle.

Explaining how the sale came about, Lesley said: “Within 24 hours of putting an advert on our website to sell the three heifers, we were contacted by Jon and Erika Janett. They had visited us three years ago to see the cattle and we had kept in touch with them through Facebook ever since. They fell in love with Ella and wanted to buy her but we didn’t expect anything
to come from it because of the distance involved.”

The wheels were put in motion quickly and the three heifers were soon en route to their new home in Tschlin in eastern Switzerland with their journey starting with a 30 day stay in quarantine in the Scottish Borders. They were then collected
in an air conditioned cattle lorry sent from Germany. Two drivers accompanied the animals so that the journey could continue non-stop with just one overnight stay en route.

They join the Janett’s 45 cattle on the Alpine farm and due to a webcam in their shed, Lesley is able to keep an eye on her girls.

“It’s great that we’ve been able to see them,” she said. “They call them ‘the three beauties’ and I know they will be well looked after.”

Brue Highlanders also have webcams in their shed where cattle lovers can keep an eye on the activities on the Lewis croft.

The Highlanders in Tschlin will enjoy balmy summers with pastures at 2,200 above sea level – nearly twice the height of Ben Nevis - and will have the option to spend much of the winter indoors as the temperature falls to lower than -15C with thick snow in the mountains.

When the animals left Lewis, Lesley was hopeful that the two older ones were in calf and indeed the pedigree of the cows was something that the Janetts in Switzerland were interested in. 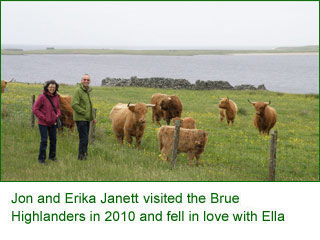 Describing more about his passion for Highland cattle, Jon said: “We visited Lesley and Kenny in 2010 and we admired their animals. As we saw on their website that they had three heifers for sale, we did not take long to consider. We want Highland Cattle from the country where they come from.”

He added:“From the transport to Switzerland, we had to fill in many forms and get permits. Because Switzerland is not an EU country and without the help of the Swiss Highland Cattle Society the import would not have been possible.”

The Janetts have 45 cattle on their farm with around half being Scottish Highland cattle. The rest are Braunvieh, which is a Swiss race; Limousin, a French breed; and also Aberdeen Angus.

“Since 2000 we have had Scottish Highland cattle and we fell in love with these beautiful animals. They are the most beautiful cattle under the sun.”

He said this had been the first time they had imported cattle from Scotland and that they were hoping to return to Lewis again.

Mara Simonetta, Secretary of the Society, said they had been established in 1995 and now had 221 members.

She said the Scottish breed fitted in well in Switzerland and that 75 per cent of members were ‘hobby breeders’ meaning it is not their full time job.

She said: “This breed is interesting because it is perfect for our mountain regions or the Alps, where many pastures are abandoned.”

She said previously milk breeds were kept in these areas but as they needed more specific care, it was not sustainable for people to keep them.

“Highlanders are easily fed with grass, hay and silage so there is a great advantage on this breed,” she added. 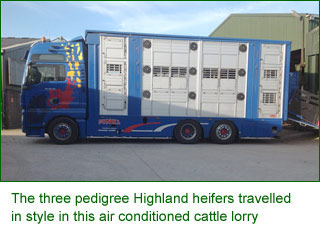 “Some of my own Highlanders spend the summer on an Alp that belongs to the Government of the region, earlier it was run by Brown Swiss or Holstein breeders, but less farmers would bring their animals to this place so the authorities decided to fill the abandoned places only with Highlanders from now on.”

Brue Highlanders Fold was started back in 2001 when the Mathesons purchased two pedigree yearling heifers at the breed’s February sale at Oban.

Twelve years on, with the help of stockman Calum Angus Mitchell, there are currently 18 cattle in the fold with all animals adhering to very high health standards as part of the Scottish Agricultural College’s Premium Cattle Health Scheme. This means the cattle are tested every year for the four main diseases and are sold with a clean bill of health.

Lesley said that Hi-health Accreditation is extremely important to them as breeders, so that buyers can be confident they are not importing diseases into their own herds.

Brue Highlanders have been sold all over the UK but this international export is a first for them and one they may look to repeat.

Lesley said the cattle are a pleasure to look after although it can be difficult to say goodbye when the animals are sold.

“I enjoy it, I wouldn’t do it if I didn’t. You do get very attached to them but as the years go by it does get easier.”

They are also suppliers of beef and on average sell a carcass each month.

Visit www.bruehighlanders.co.uk and www.janett.ch for more details about the Lewis based and Swiss cattle folds and to watch their movements live on webcam.