Edited version of this article appeared in the Stornoway Gazette, 17 October 2013 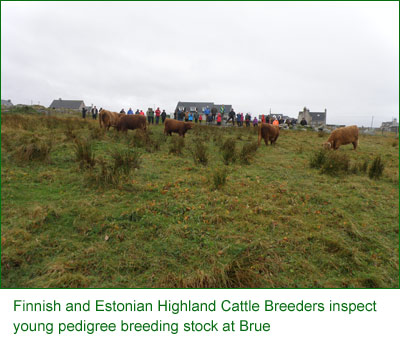 A group of Pedigree Highland Cattle Breeders visited Lewis and North Uist last week on a 3 night stay to meet with local breeders. They first visited the Broad Bay Fold at Gress, before travelling to Brue on the West Side to view the cattle and stock handling facilities. Lunch for the 43 strong group at Barvas and Brue Community Centre was provided by 40 North Foods, Bragar, which gave the visitors the opportunity to sample the best of island lamb, pork, venison, salad and herbs plus pedigree Highland Beef which 40 North rear on their own croft and use in their Bragar shop which opened in 2011. Cakes and shortbread were supplied by Nevis Bakery, Corpach, Fort William, where Stornoway owner and master baker Archie Paterson uses only pedigree Highland Beef from Brue Highlanders for his gold star award-winning steak pies.

Lunch was followed by a talk and presentation providing an overview of how Highland Cattle have been used and developed since 2000 by a group of Lewis breeders who have been working together using top breeding lines, premium cattle health and quality assured production standards. Discussing land use and cattle systems at 19 Brue, 18/19 Kirkibost, 42 Gress and 40 North Bragar, was of great interest to the visiting breeders who were very knowledgeable about the breed with a number of them having over 100 head of Highland Cattle on their own farms.

Tour guide Dr Mary MacLeod Rivett of MacLeod Archaeology, Carloway, then took the coach party around the West Side’s historical sites and onto Leverburgh to catch the evening ferry to Berneray and North Uist.

Said Kenny Matheson of Brue Highlanders, ‘Finland and Estonia are neighbouring northern European countries separated by a two and a half hour ferry trip across the Gulf of Finland, which connects their respective capital cities of Helsinki and Tallinn. They are beautiful countries with friendly people. Even in the short time we had with them it was fascinating to hear how successful Scottish Highland Cattle have been for them. They are very knowledgeable about cattle but still eager to learn and find out more. They were really interested to see Highland cattle at their best in their natural Hebridean environment.

It was also interesting to see the relatively young age range of the group. They are technologically advanced and positive in outlook with most of them, in addition to their native tongue, fluent in English too. Estonia regained its independence in 1991 from the former Soviet Republic and became a member of the European Union in 2004. Though the climate in both countries is more continental than ours with warmer, drier summers but colder winters depending on how far north or inland you are, the west side of Lewis would greatly benefit from the natural shelter and forest cover they have for wintering their stock. Talking to them was inspirational and we look forward to developing links with them and their Highland Cattle Societies. I’m sure we will continue to learn a lot from their visit which I think was mutually worthwhile.’

Day 2 gave the visitors a different perspective of Highland Cattle breeding in the islands with a visit to the long established Ardbhan Highland Fold of Ena Macdonald and her son Angus at Bayhead, North Uist. After a local seafood lunch at Lochmaddy Hotel the visitors were taken over to the picturesque island of Vallay near Sollas, at the north end of North Uist. Vallay is only accessible at low tide and the Ardbhan Fold of over 50 Highland cows, stock bulls and followers graze on the rich machair grazing and dunes which contrast sharply with the smaller croft grazings and peat and heather moorland of Lewis.

The coach tour, which was organised by Matti Makela, Finland, and Spa Coaches who also have their own Highland Cattle Fold near Strathpeffer, Inverness-shire, then took the visitors onto Skye with an overnight stay at Broadford, before heading south the following day through the west Highlands via Glencoe and Crianlarich and the tour end with flights home from Glasgow and Prestwick airports.

Commented Liisa Volanen, President of the Highland Cattle Club of Finland, who now has 37 head of Highland Cattle since starting in 2007, ‘This was a unique opportunity for us to see how this lovely breed of cattle survives in the hardest of conditions. It was wonderful to meet fellow breeders on the Isles of Lewis and North Uist. We were impressed by the hospitality in the islands and enjoyed two lovely lunches prepared by 40 North Foods and Lochmaddy Hotel. It was great to hear about all the co-operation there is between farmers, retailers, restaurants etc. Also it was a joy to feel the pride the islanders have in their work and cattle. And there’s every reason for that! I’d like to thank everybody who was involved on behalf of the whole group and we really hope to see many of you in Finland in the near future!’ 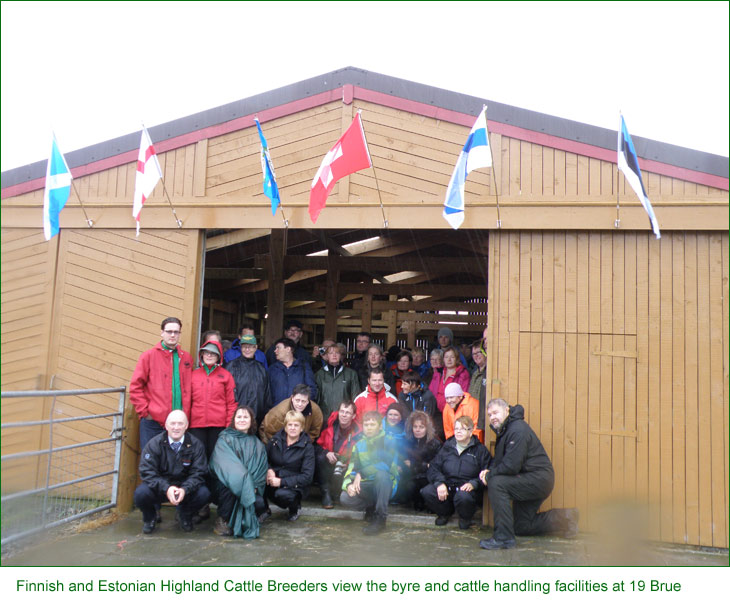