Pìobaire Ruadh of Dunvegan (or ‘Toban’ as he became nicknamed), was born in February 2004 to the well known Dunvegan Fold of Pedigree Highland Cattle on the Isle of Skye.

‘Eilidh of Dunvegan’ was one of the Fold’s best cows, regularly producing prize-winning offspring. However, her February 2004 bull calf was to be her last.

A few days after she calved all seemed fine and the farm manager and stockman were due to be away on business for a few days. However on their first night away they received worrying news from a farm hand that one of their cows had died. Fearing the worst, they assumed that her calf might not survive either by itself on the hill without milk in the harsh February weather.

On getting back they quickly went to check the cattle and immediately recognised the dead cow as their old favourite, Eilidh of Dunvegan. As expected there was no sign of her bull calf which, considering the weather, was not surprising.

Whilst checking the other cows, they then noticed that another cow had two calves suckling her when she had only one calf before they left days earlier. It was indeed Eilidh’s calf which had used all of his natural survival instincts to get another recently calved cow to adopt him along with her own calf – now she had twin calves!

Despite losing his mother during these critical early days and his heroic achievements in finding a substitute mum, the youngster had to be taken off his adopted mother so that her own growing calf would have enough milk. Eilidh’s calf was taken back to the farm to be bottle-fed by the stockman until his future was decided. What was to become of him now?

Meanwhile on another Hebridean island to the west of Skye, the owners of the Brue Highland Cattle Fold on the west side of Lewis were keeping a close eye on their own cattle as they were shortly expecting their first ever Highland calves.

Three weeks later, on a bitterly cold night their oldest heifer, Caileag Bheag 17th of Callachally, was experiencing a difficult first calving but eventually calved a big heifer calf at 4 o’clock in the morning. Both the young cow and her calf were exhausted and the local vet, Hector Low, was sent for as both were unable to get to their feet. The vet arrived promptly to find the calf, whilst trying to recover from the after-effects of a difficult birth, was now suffering from hypothermia caused by the arctic wind chill which was stealing its young life away.

Working quickly, the vet asked for the calf to be put in the nearby greenhouse with the heater blower turned Full On to try and warm the calf. Then, in the darkness, he hand milked the young mother cow in the open-air cattle pens and on transferring the milk to a special plastic bag with a long tube, started to feed the first milk to the ill calf via a stomach tube which he inserted into the calf’s mouth, down its throat and into its stomach!

After a lot of massaging to assist its chilled circulation, plus the heat from the blower from the outside and the warmth of the rich milk inside, amazingly, the big heifer calf started struggling slowly to her feet! Relieved and content with the turnaround in the calf’s circumstances the vet left for his next call, happy that he had saved another life that night.

Over an early breakfast the owners of the Brue Fold shared news of the night’s woes with the Dunvegan Fold manager and stockman: their friendship having started when the Brue Fold purchased ‘Caileag Bheag’ from Mull and another heifer from Calderglen Park, Glasgow, as yearlings at the Oban Sale in February 2001. Always ready with sound advice, the next task was to get the young calf to suckle its young mother which was now getting increasingly anxious at being separated from its newly born calf in the middle of a perishingly cold night.

However, despite rallying well and the best endeavours of all concerned and subsequent vet visits, the heifer calf died from Pneumonia complications three days later. This one seemingly was never meant to be. It certainly had not been the best of starts for the Brue Fold owners.

Faced with one dead calf but one fully recovered young cow with loads of good milk the Brue Fold owners called their Dunvegan friends for advice. Within the hour the plan was set and the Brue Fold stockman was soon on his way to Skye with a car and trailer via the Leverburgh-Berneray and Lochmaddy-Uig ferries to fetch a 3-week old orphan replacement – none other than Eilidh of Dunvegan’s orphan bull calf which had now been bought by the Brue Fold! His life prospects were about to take a turn for the better, but all that rested on his new substitute mother accepting him instead of her own dead calf.

Arriving in Brue the next evening after a long journey via Skye, North Uist, Harris and Lewis, a brown hairy ball comically stumbled out of the car trailer looking totally dazed and disorientated.

Allowing him a few minutes to find his feet and settle himself, he was then introduced to his new mother whom he instantly took to and immediately went to suckle her. Unfortunately however the liking was not reciprocated and in a maddening charge the young cow made it quite clear that this was not her own calf and that she had no desire to have anything to do with this young ‘Sgitheanach’ upstart – ever!

The immediate advice from Dunvegan was clear and firm, ”Stick with it, the cow will accept the calf!” Well, she did, but it took her 5 long weeks and 3 days during which time she had to be securely tied up 3 times a day as per Dunvegan instructions, and only then would she allow her new calf to suckle her.

Every day for five weeks, given half a chance the young cow would do her utmost to hurt or even kill the young Skye imposter and when prevented from doing so would try swiping her sweeping Highland horns or would kick viciously to prevent the calf from suckling her. When that failed she tried collapsing on the ground and playing dead!

It clearly was now going to be a long battle of wills between the young cow on the one hand and the calf, his new owners and their Skye advisors on the other.

In the calf’s favour was his own strength and determination which was matched by his former Skye owners’ confidence that the cow’s stubbornness could be broken. The only question was whether the Brue Fold owners could stick with it day after day?

Eventually as the calf got stronger and was able to run faster than the young cow, both could be let out together in a nearby field, but still she had to be securely tethered before she would let the calf milk her.

Then, early one Sunday morning having tied the cow up to allow the calf to suckle her, the calf’s own behaviour was noticeably different. He did not want to suckle! While puzzling over the unusual behaviour the phone rang! This was a neighbour who, having being involved in and had witnessed the 5 week battle of wills herself, had been up even earlier and had spotted the calf suckling its new mother, un-aided, in the open field.

The ‘Battle of Wills’ was over! As the Skyemen had stated, five weeks and 3 days earlier, the young cow and her foster calf were now the very best of friends – and no, he didn’t want any help that morning to get his breakfast as he was already full up! It was a wonderful sight to see.

The Brue Fold owners learnt a number of hard but good lessons that Spring whilst remonstrating with a stubborn cow which had lost her own calf, but which was eventually beaten by a determined orphan calf with sound, expert advice from stockmen whose knowledge was based on a lifetime’s experience and expertise of working with cattle.

In June 2006, the shaky, brown bundle of fun which tumbled out of a car trailer in Brue some two years previously was a big, strapping Highland Bull. Known to the Brue Fold owners as ‘Toban’ he is registered as ‘Pìobaire Ruadh of Dunvegan’ in the Highland Cattle Society’s pedigree herd book and is now the established and successful stock bull of both the Brue and Tom Buidhe Highland Cattle Folds on Lewis.

At age 12 months his weight was exactly 354Kg and a year later he weighed probably twice that. Already, he has sired three heifer calves and two bull calves who all have more than a bit of their father’s likeable characteristics about them. So far, their lives have been a lot less eventful! 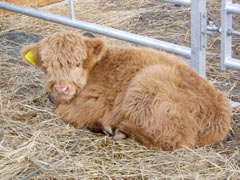 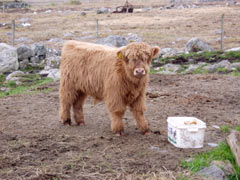 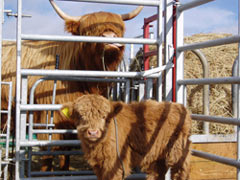 Protected by steel for 5 weeks and 3 days! 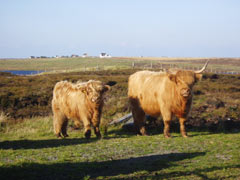 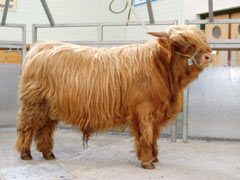 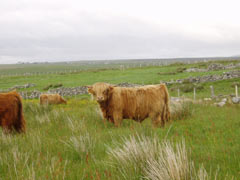 Pìobaire Ruadh of Dunvegan at 17 months 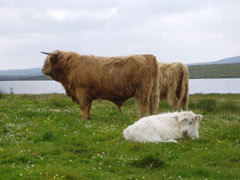 Pìobaire Ruadh of Dunvegan age 28 months and one of his first calves Ceit an Eilein of Brue, July 2006 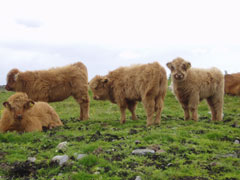