Both Cattle Folds are in the crofting township of Brue on the west coast of Lewis ,
about 11 miles west of the island’s main town Stornoway.

The crofts are relatively small, ranging from 1.5 to 4 hectares, with some arable ground but mostly given over to stock grazing. Most crofters have apportioned some of the ‘in-bye’ Common Grazing for their own stock after fencing and reseeding it to improve the pasture.

The township also has five village apportionments for cooperative use by share-holders, ranging in size from 30 to 300 hectares, most of which were fenced and developed in the 1970s. The overall Brue Common Grazings extends to 1977 hectares much of which is made up of unfenced open hill, moor, peatland, lochs and rivers.

In June 2006, most of the crofts were grazed by sheep with a few crofters having the use of a neighbouring croft. Only 3 crofts currently have cattle, one of which breeds continental crosses for beef production while the other two breed pedigree Highland Cattle.

The village has an active Grazings Committee who are engaged in supporting stock-holders in a long tradition of working cooperatively and helping one another during stock grazing rotations and gatherings (fanks), sheep dipping, silage harvesting, maintenance of village fences and boundaries, etc.

In the 1960s, about half of the crofts had at least one milking cow with followers. However, a declining trend away from cattle continued from then till 1997 when there were only 2 animals left at Croft No8 Brue. In June 2006, numbers had recovered to over 25 head of cattle on Crofts 5, 8, 9 and 19.

Tom Sgeireach Harvest
Harvesting silage using a Wolagri mini baler and wrapper for Brue Township Crofters, on the west side of Lewis, local island contractor Derek MacLeod, took over 700 bales from this field. The bales will form part of the winter and spring diet for the township’s hoggs, ewes and cattle. 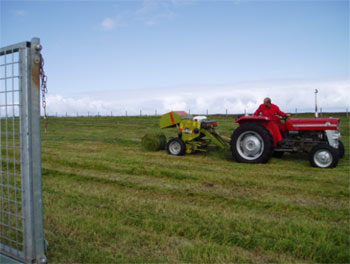 Mini-baling with the Massey 135 following the previous evening cut. 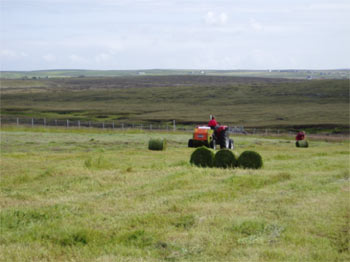 Rolling the bales into batches for wrapping is tiring, but it still beats a day on the old hand rake! 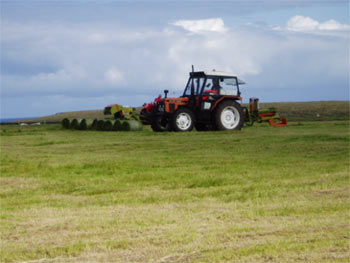 Wrapping in a quality crop, that will be much appreciated in the depths of the Lewis winter. 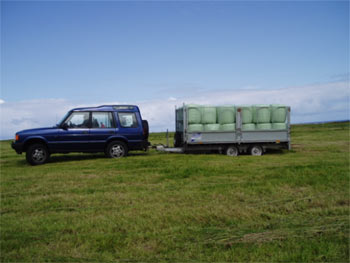 On the uphill pull - neighbour Iain Campbell lends his Landrover’s power to haul a load of 36 x 60kg mini-silage bales!